Every Sunday at 8am join a small army of runners to explore Wellington’s most beautiful spots on foot. Join our Wellington Sunday running group!

These social runs are totally free-of-charge and ideal for EVERY level of runner. Plus, you don’t have to be a TempoFit member. At every run we have options to complete just 5k all the way up to 30k +.

We always have different pace groups to choose from (typically between 5min/km and 7min/km—so there is no such thing as being too slow!). So find a pace that works for you and enjoy discovering Wellington’s best runs with great company.

And we’re on rain, hail or shine. 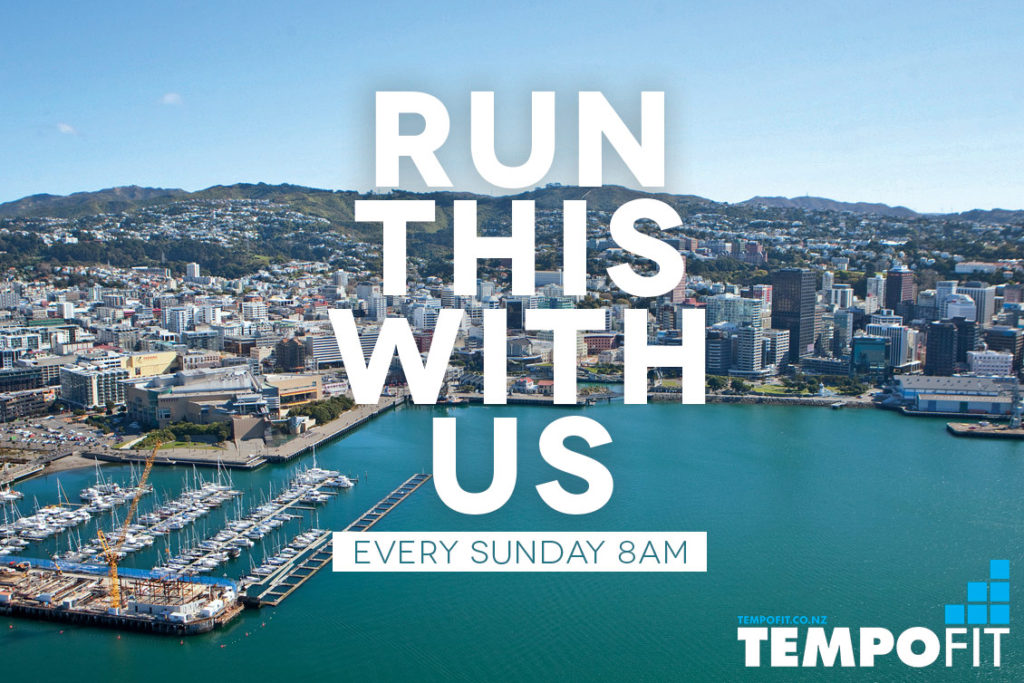 NOTE: All runners run at their own risk and agree not to hold TempoFit or any run leaders responsible for any injury or damages to their person or belongings.

We’re kicking off our Autumn Sunday runs with a nice flat, Mother’s Day trot along the Petone foreshore. We’ll go 5k out and 5k back (10k total) with plenty of options to run further or shorter.

Adding On: Head over the motorway to Korokoro Stream or follow the Hutt River Trails north alongside the river.
Distances: 10K + options

Meet at the surf club on Toms Rd, run north along the beach, turn right on to Bay Dr and then next right on Main Rd. Follow Main Rd all the way to Porirua Harbour and turn left on to Onepoto Rd. Follow the coastal trail around the peninsula. At 6.5km follow the road up the sharp climb over the hill, down Thornily St to Bay Dr and the beach.
Cutting Short: Turn back at any point on the coastal path (complete an out-and-back).
Adding on: Complete another lap and include the alternative inland trail within Whitireia Park.
Map

Today we’re going to follow the waterfront around to the Westpac Stadium to get familiar with the first and final few KMs of the Wellington Marathon course.

Plenty of options to add on along the waterfront (towards Evans Bay) and to shorten by turning back early.

Start at Aotea Lagoon. Run up Whitford Brown Ave, right onto Okowai Rd and then look for the bike path to your right which follows the motorway south. At the Porirua Train Station turn left to follow Mepham Pl and then Champion St before entering Bothamley Pathway alongside the stream. Follow the main path all the way up to Warspite Ave (be sure not to take the other smaller tracks leading off the main path). Shortly after crossing Warspite Ave, turn left in Ascot Park turn run on the western side of Ascot Park’s playing fields and onto Ascot Park Walkway (rising up the gorse covered hill in the park’s far corner). Follow this track around and over the hill (you’l be just below Doncaster Tce). Join the Conclusion Walkway as it heads back down the other side of the hill to Whitford Brown Ave. Turn left and follow it to Aotea Lagoon.

Cutting Short: Slice off 2k by following Warspite Ave direct to Whitford Brown Ave (instead of entering Ascot Park).
Adding on: Loop around the Lagoon and then carry on via Papakowhai Rd to the Plimmerton waterfront.
Map.

From the Plimmerton shops (corner of Steyne Ave & Beach Rd) we will cross the train tracks to head north along the Araharakeke Walkway (that runs alongside the motorway). Then we’ll follow Airlie Rd over the hill back to the Plimmerton foreshore. We’ll turn right towards the mare, before heading back south to the shops.

Adding on: Run along the foreshore either direction.
Shortening: Turn left at the end of Airlie Rd instead of turning right.
Map

18 June: NO SUNDAY RUN – join us cheering on our fellow TempoFiters at the Wellington Marathon!

OTHER ROUTES WE RUN

Nice and flat along the scenic Plimmerton waterfront. From the shops and cafes at the corner of Steyne Ave and Beach Rd, we’ll head north to just past the mare (3k) and swing around (making 6k total).

Cutting Short: Rather than heading out to the marae, turn left at the waterfront to run directly to the Plimmerton shops (cuts out 1.5k).
Adding On: Head south along the Plimmerton coast to Ngatitoa Domain and then over SH1 to the Camborne Walkway (out-and-back).

Starting and finishing at the cafes on the corner of Beach Rd and Steyne Ave, we will head south along South Beach Road to Ngatitoa Domain where we’ll go under the road and rail line to venture along the idyllic Camborne Walkway. There are toilets at the end of the walkway where we will spin around and retrace our steps to a waiting coffee and cake in Plimmerton.

Cutting Short: Turn back at any point.
Adding on: Heading north around the coast at Plimmerton
Map.

Starting from Khandallah Pool, head down Woodmancote Rd to Burma road. Run Burma road towards Onslow College. Turn left at the roundabout (Haumia Street). Turn into the first street on the right (Fisher) and run through Alexmore Park. Come off the park to Bannister Ave, just after the club rooms and run across into Kipling Street.

On left hand bend take access to Kipling Park and run through the school to Broderick Road. Run up Broderick road to Old Coach Road track. Follow track to the top of Mt Kaukau. At the top of Kaukau run down the track to Khandallah Pool. 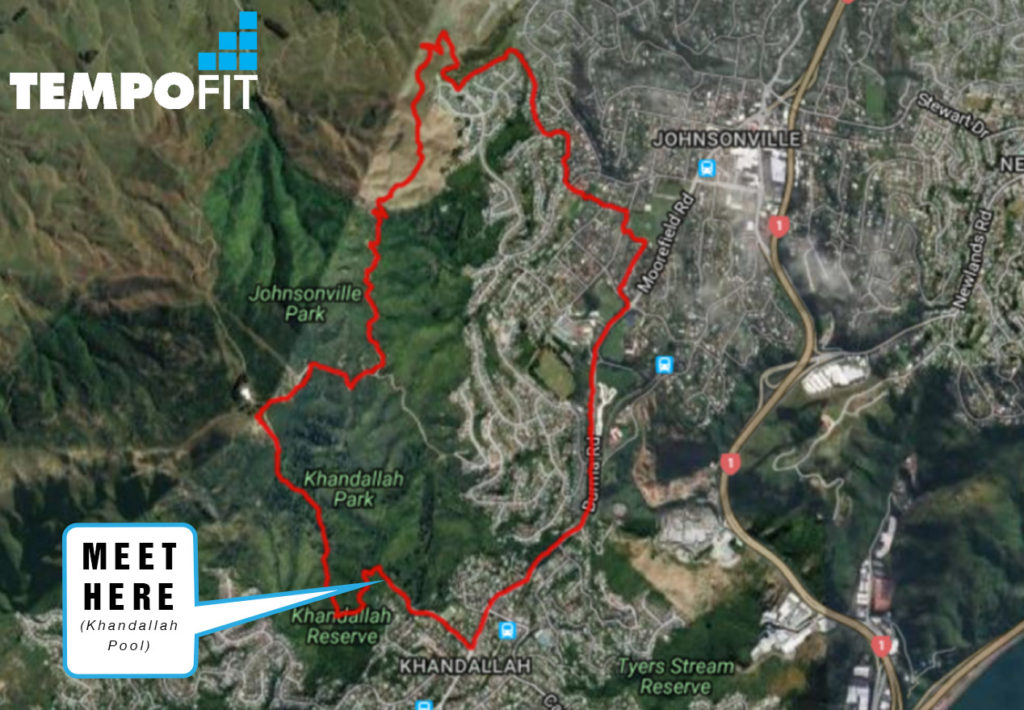 From Freyberg Pool in Oriental Bay, follow the waterfront south to Evans Bay and the wind wand. At Cobham Dr turn right to follow SH1 up to Wellington Rd and enter the trails of the Southern Walkway (rather than head over the hill into Newtown). Follow the Southern Walkway (which hugs very close to Alexandra Rd) up towards the summit of Mt Victoria. The path skirts around the western (left) side of the summit before crossing Palliser Rd and descending back down to Oriental Pde.
Cutting Short: Turn back at any point on the waterfront pathway (this also avoids the hills).
Adding on: Complete another loop or follow the waterfront path around to the Westpac Stadium and back (6k return journey).
Map: http://www.mapmyrun.com/routes/view/1015677389

Today we’ll be running over the exact course of the Pelorus Trust 10k event (to be held officially on 11 Sept — details here). Meet at McEwan Park, Marine Parade, Petone.

Cutting short: As you can see from the map there are a couple of opportunities to cut corners and slice some KMs off the total distance.
Adding on: Heading west along the Petone Beach front.
Map.

This is a beautiful and sheltered route through the hills and bush of Belmont Regional Park. From Petone Wharf we head over the motorway to the car park at Cornish St. From it’s another 3k up to the dam. You can either turn back there (to make 10k total) or do the full loop by carrying on up and over the hill back down Maungaraki Rd (making a hilly 14k total).

Start from Ngaio Library, run south towards Crofton Downs (Waikowhai Street). Turn right at the first roundabout (Silverstream Road). At the end of Silverstream road where it turns into Spencer street, take the very end driveway up to Silversky Trail.

At the top of Silversky turn left and follow the vehicle trail and the road to the first street on the right (John Wilton Drive). At the end of John Wilton Drive follow the Red Track to the flax clearing. From the flax clearing follow the yellow trail until you get to the yellow and blue intersection and follow the lower blue trail to Karori cemetery. From the cemetery, descend down to the main Otari Trail and run through to Churchill Drive. From there, run through Crofton, back to Ngaio libarary. 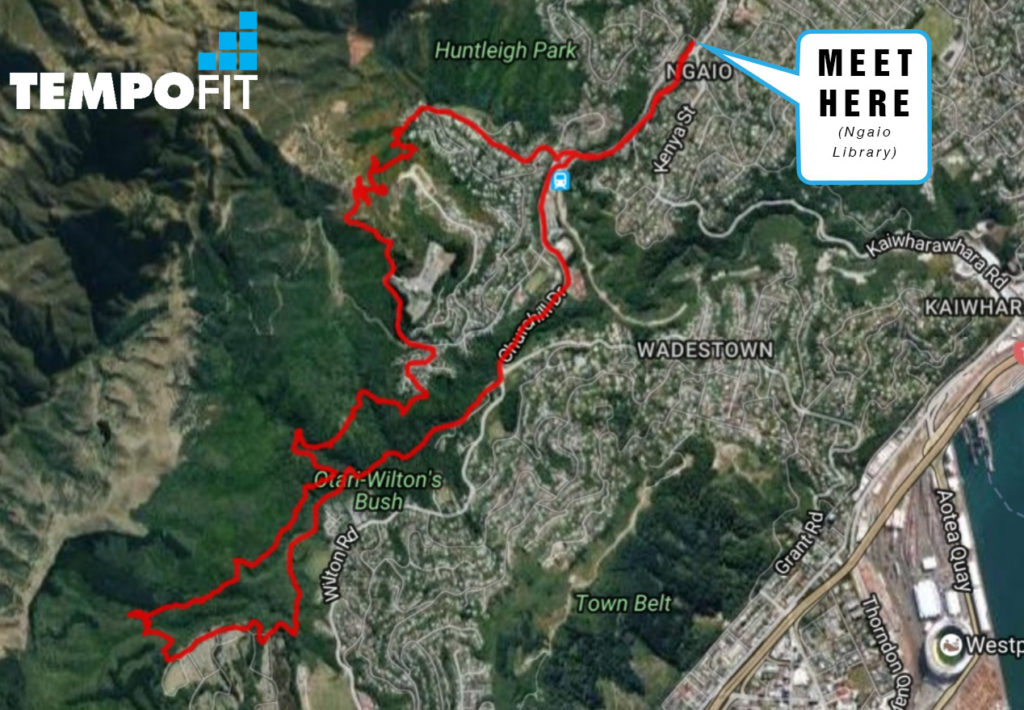