Sarah joined TempoFit at the start of 2014 where she ran the equivalent of 32 minutes for 5k. Nine months later she had brought that time down to 25:13. And in early 2016 (two years after joining) she ran 23:25 for a new 5k PB—not far off 10mins faster than her starting point.

Her improving times illustrate the massive benefit of consistent training over months and years. She's consistently been one of our top attendees and her hard work has paid off hugely!

We picked Sarah's brain for the secrets to her success:

TEMPOFIT: Did you ever imagine you'd be able to run 23 minutes for 5k?

SARAH: Definitely not! For a long time my goal was getting down to 25 minutes and then trying to stay there. It's crazy how after two years I'm still able to surprise myself, I'll need to come up with a new goal now.

TEMPOFIT: In your mind, what made the difference for the incredible increase in speed you've seen?

SARAH: A lot of little things like the techniques we learn at TempoFit, structured training and building up a good base fitness with longer runs, but I think the key is consistency. Mental focus is also a huge factor.

TEMPOFIT: What would you recommend to runners who might be starting out but not feeling like they're fit enough?

SARAH: Don't compare yourself to others, find someone who runs a similar pace and get chatting—it does make the run go faster! Talk to more experienced runners (we all love to talk about our favourite hobby) and learn from your own mistakes—we all make them. Learn to trust the training and enjoy the runs, the rest will come. 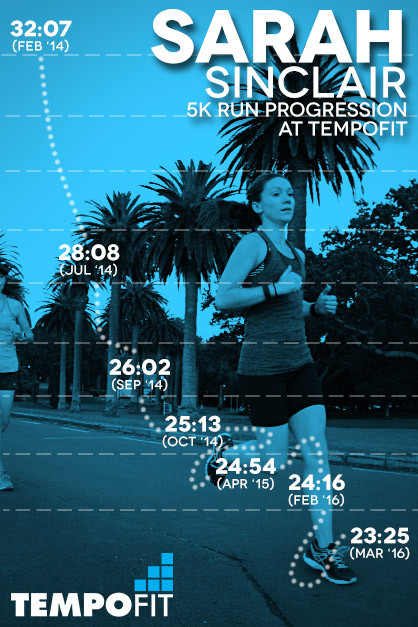 "After a couple of seasons of Tempofit, running a half marathon never felt so good." - Jim

"I really enjoyed the Tempofit programme. I learnt a lot, met some great people, and got a great result out of it with a new 5k PB!" - Simon

"I have just finished my first 6 weeks of TempoFit Tawa and am really happy with the outcome.  I’d even go as far as saying its changed my entire view (20 years +) on how I have approached running. Not only did I take off 1 minute off my 5 km time which I had been struggling to do for months but I found it a great way to train with likeminded people. Each session is different and delivered at a professional yet relevant way for all levels and abilities. I would totally recommend TempoFit to anyone looking to feel motivated and keen to challenge the way you approach running." - Angela

"As a 'plodder' good at googling running training programmes and not doing them I was so impressed with TempoFit. Organised and encouraging sessions that have made me much better!" - Nora

"I took a look back at my training logs. I did virtually the same mileage during training this year as I did for the 2011 Auckland Half Marathon, yet this year I was 6 minutes faster. The difference is that this year’s training was done with TempoFit." - Jim

"TempoFit turbocharges your running motivation! It is great to have company particularly when doing challenging faster paced workouts. Since joining TempoFit I've run PBs that I never thought were possible across all distances from 5k to the marathon." - Anna

"I've never attended a running group but did Summer and Autumn seasons with TempoFit. That shows they must be good! Hayden's a great trainer and Charlotte is fantastic when it comes to stretching—they're a great team! Really looking forward to the next season." - Helene

“Within the first five minutes of my first session, my worries of not being ‘good enough’ quickly vanished as there are so many different levels of ability which makes each session so encouraging and dynamic. After only three weeks I noticed a huge improvement to my technique and speed.  I did not expect that so quickly! Hayden and Charlotte are just awesome at what they do and I’m already looking forward to the next season!” - Sarah

"Hayden’s workouts are great with plenty of variety and support to achieve your running goals.  He has helped me greatly improve my form and pace over the last 6 months.  I would thoroughly recommend Tempofit to anyone interested in becoming a better runner." - Tony

"Hayden is a great coach and I have really enjoyed the running technique and speed work. And the social side of running with others.  As a result of attending Tempofit sessions I have really started to enjoy running and I have been inspired to run my first marathon—something I thought I would never do." - Darryl

“I recommend TempoFit to runners of all abilities. While the sessions are held in groups, the format of the programme means that every individual will benefit from the training on offer. The programme is well organised and highly professional. Hayden and Charlotte were friendly, made the sessions enjoyable, and were available to answer any running relating questions. At the start of the Tempo Fit Programme, Hayden said that we wouldn’t want to miss a single session. I took the comment with a pinch of salt however he proved to be spot on!” - Paul

“TempoFit definitely sped me up. In the half I beat my target of sub two hours and finished 10 minutes faster than last year.” - Becky

"After a couple of seasons of Tempofit, running a half marathon never felt so good." - Jim

“Doing the speed work with an experienced coach was much easier than trying to push myself to do it alone. Hayden worked out all the numbers, such as my threshold pace, and kept a record of all this. If like me, you are not so good on the science side, TempoFit can really help. As a result, I have been running faster over hills and finding that burst of energy mid run on the long runs, as opposed to simply plodding at the same pace as I was doing previously. I also think for the number of sessions you get it is good value for money and cheaper than some of the other programmes I have seen.” - Molly

“Mostly what I got out of TempoFit was motivation. I had gotten bored with running and it was great to do something different. I really enjoyed the mix of different workouts (e.g. instead of just going for a run 3x a week).”
- Anonymous Survey Respondent (Spring 2013)

“I have learnt so much from the training and would definitely recommend it to everyone I know.”
- Anonymous Survey Respondent (Spring 2013)

Ladies and gents put your hands together for TempoFit-er Esther Bowe who just ran her 7th marathon ... and the first in which she has actually enjoyed every KM!

We caught up with this mum-of-2 to find out some secrets for enjoying the marathon.

TEMPOFIT: Seven marathons in ... what was your goal for this one and how did it go?
ESTHER: I completed the Hawkes Bay Marathon in 4 hours and 27 minutes. I had no real goal in mind, other than to complete it and it's the first marathon that I have completely comfortably and actually enjoyed all the way through.

TEMPOFIT: "Enjoy" is not a word usually associated with kilometres 30 through 40, so what for you makes one marathon a slog and another enjoyable?
ESTHER: It's the first in 7 marathons where I have run a negative split and its also the first time I haven’t hit the wall.

TEMPOFIT: So, this time, what made the difference?
ESTHER: I have absolutely no doubt that this was a result of the excellent training at TempoFit. I followed a training programme designed by Hayden Shearman (TempoFit coach), completing TempoFit workouts twice weekly and a long run on the weekend with the group where I could. With excellent advice from Hayden and other runners from the group I felt fit, ready and prepared leading up to, during and after the race.

TEMPOFIT: Hawkes Bay Marathon, what did you think?
ESTHER: The course was fabulous with mixed terrain and beautiful scenery.

TEMPOFIT: Is there an 8th marathon on the cards for you?
ESTHER: I found this marathon to be an awesome experience—from training to crossing the finishing line. And I am now sizing up my next race. 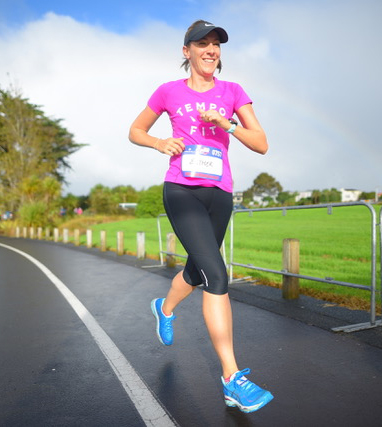