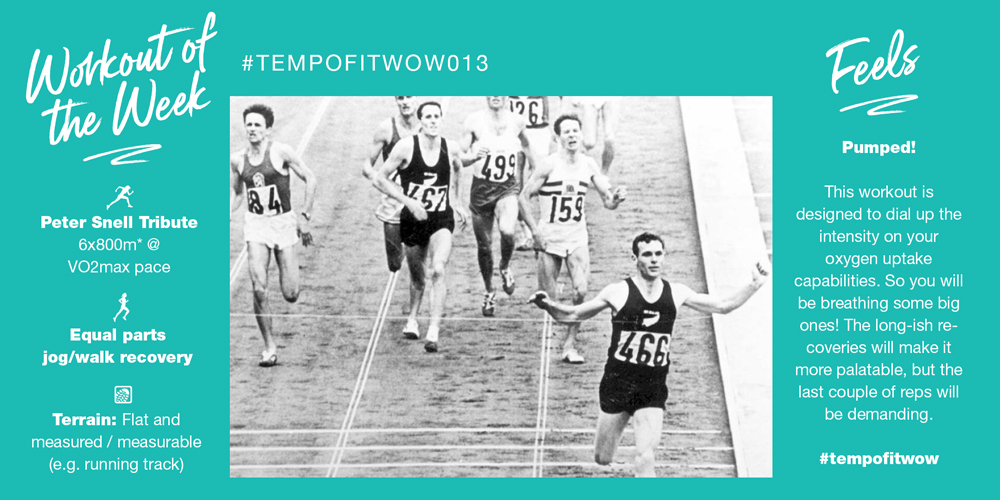 Following the sad passing of one the world’s greatest middle distance runners, this week we’re doing the workout that Peter Snell did two weeks out from his double gold (800m & 1500m) at the 1964 Olympics.

It’s the mother of all interval workouts. So get ready to get those lungs pumping!

This workout is designed to dial up the intensity on your oxygen uptake capabilities. As such, you will be breathing some big ones! The long-ish recoveries will make it more palatable, but the last couple of reps will be demanding.

If your 5k time is above 25 minutes, please only do 4 reps. And if you’re between 20 and 25 minutes, do 5 reps. This is important in order tweak the workout to your fitness level and make sure we’re all doing a similar amount of work as far as time-on-feet is concerned.

Be sure to pace yourself well early on so you don’t wind up spending too much time maxed out.

What’s my VO2max pace? Check the TempoFit.org calculator and here are some quick guides:

VO2max-style workouts are the icing on the cake workouts.

They bring all the pieces together of long aerobic endurance running, speed and technique work, lactate tolerance training, and strength. As such, research tells us that these workouts provide incredible fitness improvements in the short-to-medium term.

Here’s an excerpt from Sweatelite that details Peter Snell’s daily training in his lead up to completing the famous 800/1500 double gold at the 1964 Tokyo Olympics (a feat that hasn’t been done by a man ever since—it also involved running six races in eight days!).

October 13: Half an hour jog

Workout of the Week: 043 – Two-Speed Intervals